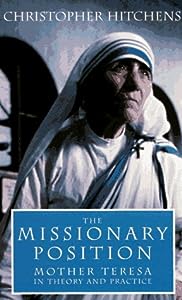 I’ve yet to read Christopher Hitchens’ biography of Mother Theresa, The Missionary Position, but I think it’ll be high on my list now that I’ve viewed “Hell’s Angel,” a documentary narrated by Hitchens and, I assume, based on that work.

Hitchens, in three 8-minute clips of the original BBC 4 documentary, paints a very different picture of this “saint” of Calcutta than is held by most people in the West. “Mother Theresa” is a name synonymous with “charity” and “good deeds” as well one who is “virtuous.” How many times have we heard someone referred to as “a regular ‘Mother Theresa’” or, my favorite, “she’s no ‘Mother Theresa,’ you know.” After watching this documentary, I’d take the latter as a compliment!

Hitchens reveals Theresa as someone who, intentionally or not, favored the rich and powerful while actually doing very little for the poor. Her Calcutta hospice is shown for the death-trap it probably was -I’m still getting over the interview of Mary Loudon, a writer and former volunteer, who was shocked at the mistreatment and negligence of the patients, including a 15 year old boy who required a trip to the hospital for treatment of a relatively simple kidney infection. Instead, he was according to her anecdote, consigned to death: “if you help one, you then have to help them all.”

Uh… yes. That’s what a real saint would do. Help them all.

The Missionary Position is next up on my reading list. In the mean time, I recommend the documentary, “Hell’s Angel” as well as documentary-log.com, where you can find over 50 documentaries on Religion, and scores more in dozens of other topics.

You can find the 3 part series here at documentary-log.com.