Child Predators and their Champion: the Catholic Church 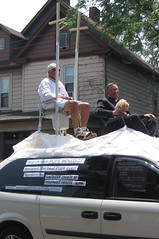 In a recent article I discovered online with Dalje.com, a Croatian site, I came across the following quote[1].

But is the Catholic church being unfairly targeted, and, if so, why? Are atheists innocent of child abuse, or Protestants, or Jews? While it is true that the Catholic church represents the largest single religious entity in the world, and wields great influence, should it therefore be held to a higher standard by the media? It doesnâ€™t seem quite fair. After all, does a child suffer less agony, physical and emotional, from the illicit touch of an atheist, a rabbi, or a Protestant minister than that of a Catholic? Of course not. And should a pastor or a rabbi or an atheist be spared humiliation, disgrace, and public reprobation in the media and his community because he belongs to a smaller, non-Catholic religious denomination?

The author, Julienne Eden BuÅ¡iÄ‡, is clearly missing the points of the criticisms against the Catholic church. The point isn’t that critics perceive Catholicism as a cult of pedophilia, rather it’s perceived as a cult of cover-up.

The one thing that the other groups the author mentioned (atheists, Protestants, Jews) as well as those not mentioned have in common is that they shun pedophiles and rapists within their groups. It is rare that these groups seek to pay off officials, intimidate victims, witnesses, and complainants, or relocate these dangerous criminals to new, fresh sources of pleasure.

We’re not talking about pastors who are drunks or guilty of skimming the collection plates. We’re not even talking about clergy who make unwanted advances on adults. We’re talking about predators who put their genitalia in the mouths of children for their own pleasure and then shame the children into silence. The predators are then protected, not by their immediate friends, but the entire Catholic church, starting with the pope himself.

This is a crime against humanity and one that should not go unpunished. The pope himself should be held accountable and, with any luck, will be arrested once he arrives in Britain.